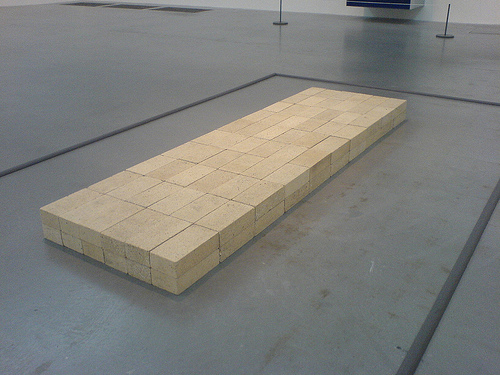 Considerable concentration is required whilst constructing a stone wall but occasionally the mind drifts, the infamous ‘pile of bricks’ correctly titled ‘Equivalent VIII’ by Carl Andre was a subject that diverted mine on occasions last week.

As part of the works for Horatio’s Garden at Salisbury Spinal Unit, I was constructing a wall to form part of a Summer House which will stand in one corner of the site. Assessing through the ten or so bags of Cotswold Limestone available my heart sank in the realisation that the stone was, lets just say – not the best. Half the bags contained the remnants previously rejected in the building of the garden walls, the remaining bags did not offer much consolation. (I hate these bags! convenient for suppliers but totally useless for the waller to see what’s in them to build with.)

It then occurred to me this is the true nature of the beast that is stone walling; whenever or wherever stone has been used, since man first picked up a rock and placed it upon another to create some construction they have been at the mercy and vagaries of the material available. Stone by it’s nature is an organic and random material, it’s final aesthetic beauty when touched by mans skill often belies the sheer physical and mental endeavour required to transform it from the heap of raw material.

Difficult to collect and move about, awkward shapes and sizes, riddled with imperfections and flaws, dirty and dusty, requiring discipline and application to work, stone is when you consider it rationally not the ‘perfect’ building medium. It is surely not difficult to imagine many instances across the ages of the frustration caused by the stone not being ‘the best’ or different from what was desired. A major example being the Washington Monument, it changes colour halfway up as the builders were unable to source the correct stone after an enforced hiatus in construction due to the American Civil War.

Dealing with the inherent characteristics of stone is what the waller does that is their job, but we all desire an easy life and would prefer ‘good’ stone in preference to bad. So filling the barrow with whatever came to hand I started using the stone available to build the summer house wall. 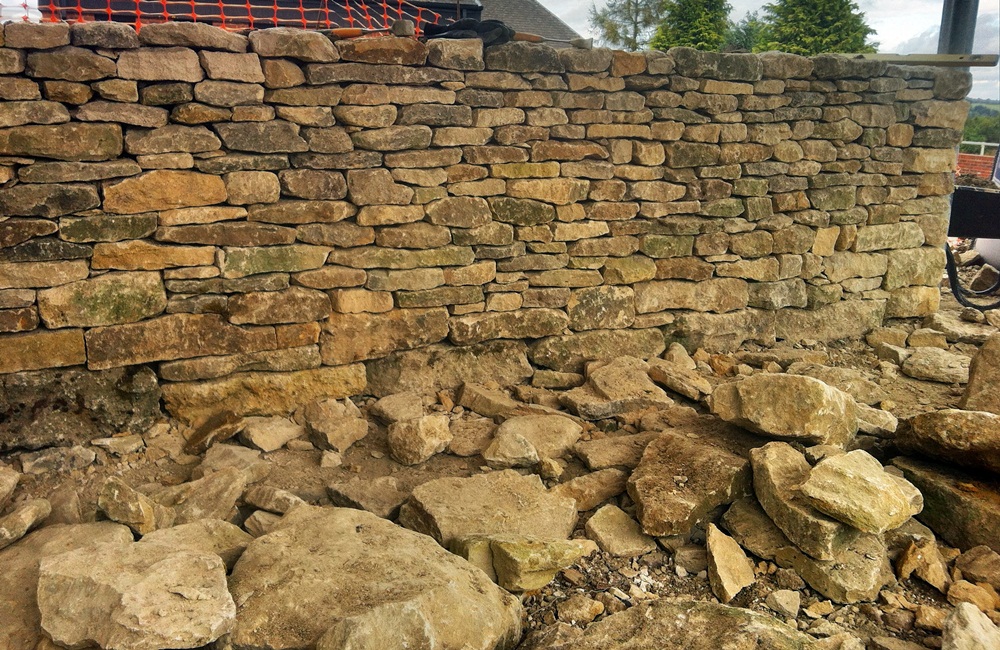 It is difficult perhaps for the non waller to understand what constitutes a ‘good’ stone over a ‘bad’ one, to explain a ‘good’ one fits with the minimum of effort at the right time and makes subsequent building upon it a simple affair. A ‘bad’ one shows no potential when lying in front of you, when you pick it up it has no ‘face’ (the desired surface that will be visible in the completed wall) and does not want to sit well upon the previous stone laid. Solving and controlling these issues is central to the wallers art, a constant battle between the material and the waller, let the stone dominate and you will lose, the completed wall will show who won the contest! Good walls have tight fitting joints, consistent coursing with a flush finish to the outer surface. Lazy and incompetent builders compensate for the stones inconsistencies by using mortar – sometimes loads of mortar. Experience and endeavour are required to achieve the best results, the will of the waller must succeed over the limitations of the material. Attaining the skill level required to work stone to a quality finish takes many years of practice and experience not easily gained as this definition proves – ‘an expert is someone who has made every possible mistake in a very narrow field’. Trying to pass on that knowledge is not an easy task, training others to get their own eye in to the potential of a pile of stone can take years with many never being able to achieve great results.

So stone is a material that has many issues, it is an inconsistent difficult material which takes time to learn and a high degree of skill to use well, it was this train of thought that opened up my eyes to the sheer brilliance of Carl Andre’s bricks. Was the invention of the brick a truly inspirational ‘eureka’ moment related to the use of stone. Dreamt up by some frustrated foreman on some ancient site, possibly Mesopotamia? Under pressure and fed up with progress and problems caused by the stone and  the masons at his disposal? How many hours had he tossed and turned in his bed cogitating over the cause of his vexation?

The genius of his solution is beautifully captured in the sculpture ‘Equivalent VIII’ Presented before us is the truly game changing innovation of the age; man made, consistent, regular, clean, hand sized, easily stacked & moved about, requiring no special skills or eye to build,  everything that stone is not.

It illustrates perfectly mans desire for control and order. Mathematical in origin, it’s width is half it’s length, a brick must surely be one of the first innovations of mans that allows him through sheer ingenuity to break free from the restrictions imposed by the natural world. With ‘The bricks’ Carl Andre presents us with this amazing ‘WOW’ moment. It reveals fundamental truths about the human condition the need for control and order and in a minimalist way it is open to interpretation, encapsulating many ideas and concepts whether he had the  stone connection in mind – who knows.

Being a waller,  using stone all the time despite it’s intrinsic difficulties all I know is I love to use it, I relish the challenge and nothing gives me more satisfaction being able to walk away from a completed wall knowing that my skill and effort won over the difficulties and each stone used deserves their place and is shown to it’s best, there for others to look at and enjoy. Give me stone over brick any day!! 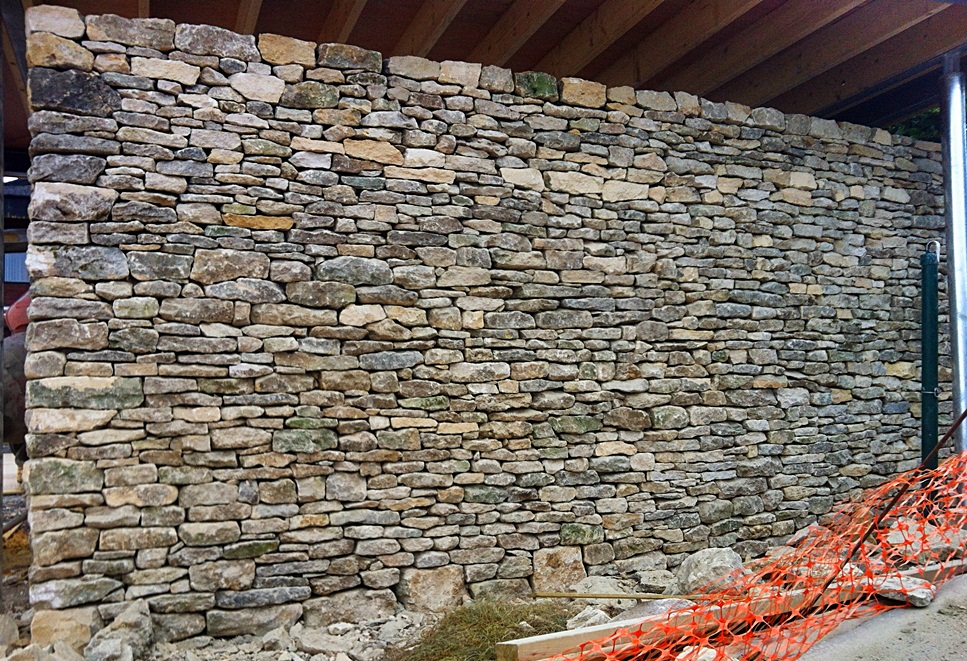 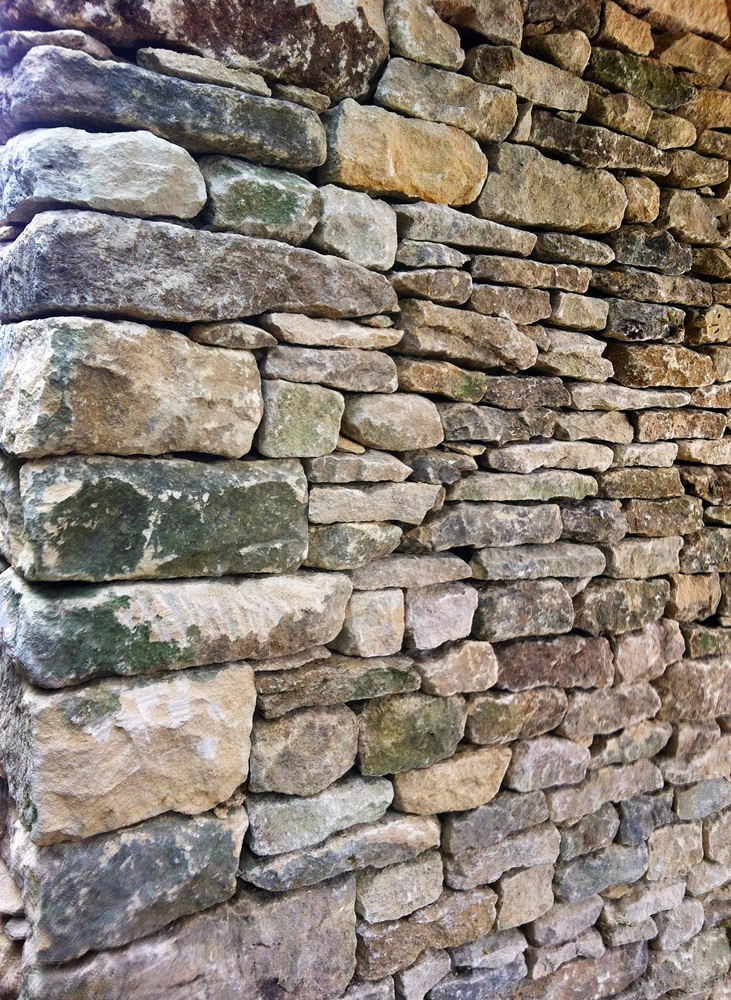