My final contribution to the Loch Leven Heritage Trail is a large stone sphere with 4 migrating birds carved on it. The block that I eventually managed to source was slightly larger that I had anticipated at the design stage and the working & shaping it to the final form has been a real challenge – a contest between myself and the block which due to it’s size & fearsome nature I nicknamed ‘The Beast.’ 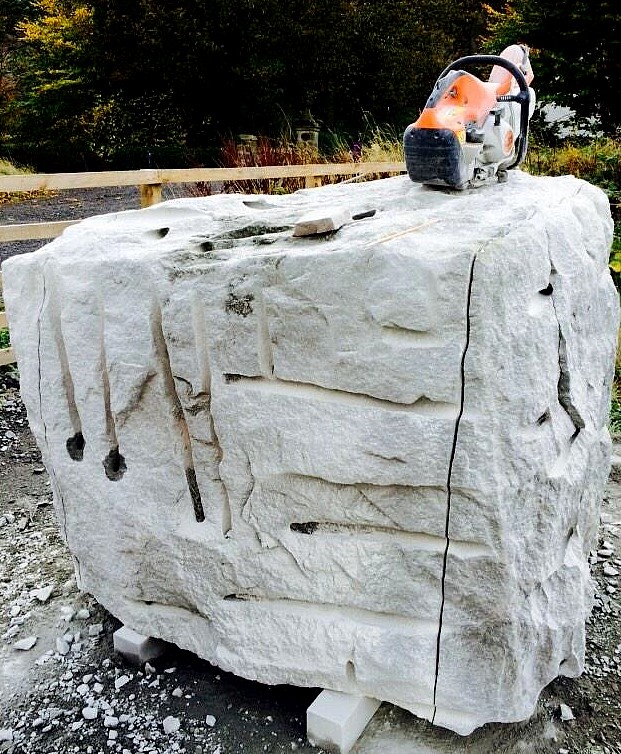 The block was approx 1.5mtrs x 1.4mtrs x 1.25mtrs and would allow me to get a 1.2mtr diameter sphere from it. People genuinely seem to be fascinated that a nearly perfect sphere can be handworked. The process though laborious, hard work, time consuming & physically exhausting is actually fairly simple. Starting with a 2-dimensional drawing containing a circle I use this to measure areas that I can chop off knowing that if I am accurate with those cuts I will have identified specific target points upon the major axes of my desired sphere. Once the three major axes are established it is then a matter of expanding them out working towards the final form.

Though the concept is a simple one carrying it out on a large, hard block of granite in 3 dimensions takes a lot of time & effort. It is at times like these, when you are using all the latest power tools & sophisticated diamond cutting blades, that you can only but be in awe at the sheer skill, ingenuity, tenacity & determination of those ancient craftsmen that have created such wonderous works in the past without these modern aids – though I contend they would have used them if they could have!

Once the areas of the block that need to be removed have been identified cutting them off is achieved by making a series of parallel cuts into the block called ‘kerfs’ & then using a hammer & chisel to knock off the stone between these cuts. The wider spaced you make the kerfs the more difficult they are to knock off so a bit of trial & error at the beginning of working the block is required to balance the amount of cutting done to effort required to do the chopping. ‘The Beast’ proved to be very hard indeed so the kerfs needed to be quite closely spaced or there was an awful lot of inefficient bashing. Once you get to the point of understanding the working qualities of the stone it is then simply continuing through the process of cut & chop till you have removed those larger areas. After removing the strips between the cuts the surface of the block is left with a distinctive parallel pattern of marks that is created by the tip of the cutting disc. This method is continued with all around the block until to do any more would be in danger of getting too close to the depth of the final form surface. 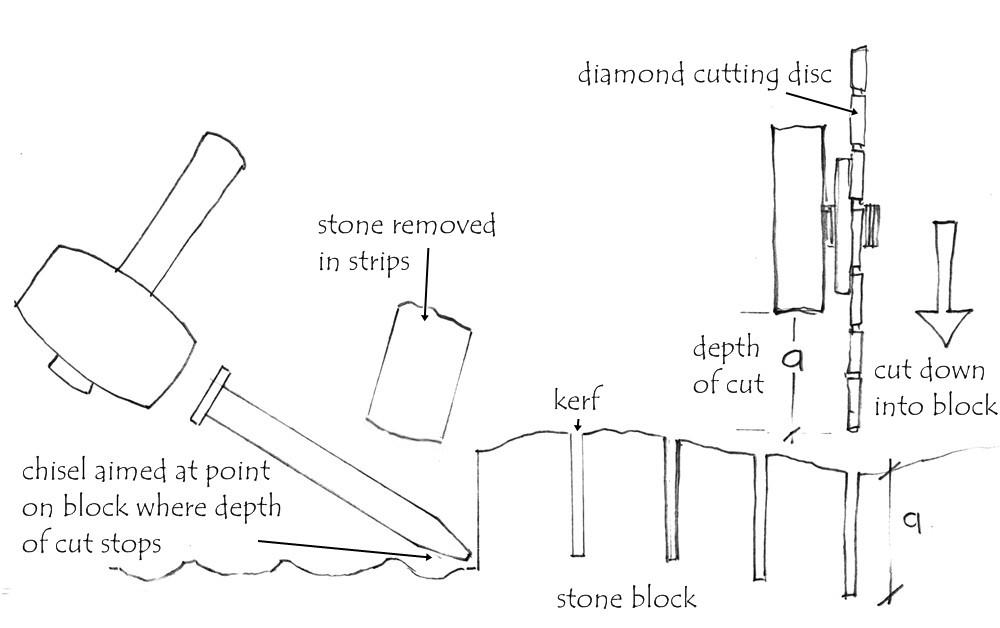 Granite is one of the hardest materials that a sculptor will ever have to cut & shape so using the correct equipment & tools is essential to working it efficiently. Specialist cutting discs that are impregnated with diamond on their working edge are the basic cutting tool that is used. These come in a variety of grades for a range of different types of cutting machines, marrying these differences leads to efficiency upon the tools & the operator. Diamond is held within different strengths of ‘bond’ onto the surface of the discs this is done to match the cutting abilities of each bond to the qualities of the material being cut. Some materials are very hard or particularly abrasive and using the incorrect bond leads to excessive wear of an expensive blade. There are a wide range of discs on the market for a variety of uses and would require an expert to explain all the technicalities, but as a basic explanation a hard bond is used for softer material & a softer bond is used for harder materials. As the disc cuts the material new diamond grains are exposed and cutting progresses efficiently – too hard a disc on too hard a material and the result is a ‘polished’ disc that will no longer cut. Large areas of ‘The Beast’ block needed removing & the first machine that I used was a petrol driven cutting saw with a water feed to help cutting & reduce the wear upon the discs. Being a hard stone the discs I used on ‘The Beast’ were of a soft bond & though these were a very good blade due to the amount of cutting required I was using 1 every day.