Every artwork begins to be realised when it makes that crucial leap from the artists brain into something tangible, be it written outline, sketch on paper, collage or lump of clay, at that point it ceases being their sole preserve and becomes something they can share with others. The sharing moment in a commission is always when I feel most vulnerable, all previous work & experience goes out the window – will these clients ‘buy’ this concept?

Concepts as implied are not always fully worked out when this sharing moment arrives, an essential part of an artists toolkit is the ability to get others to see the potential in their concept, allay doubts that subsequent issues and problems will be overcome professing confidence despite any fears they themselves harbor, as all schemes involve risk.

Balancing proper preparation of a scheme is an acquired skill; under prepared an ill thought out scheme will reflect badly on your professionalism and likely or not fail, over prepare, you risk time wasted if the client doesn’t like that concept. My approach to this conundrum is to keep things very fluid in the early stages, broad brushstrokes as opposed to detailed work, it is fascinating, to myself at least, when reviewing projects recognising that everything was there almost fully formed in the initial sketch, right at that point where it leapt from the mind’s eye. 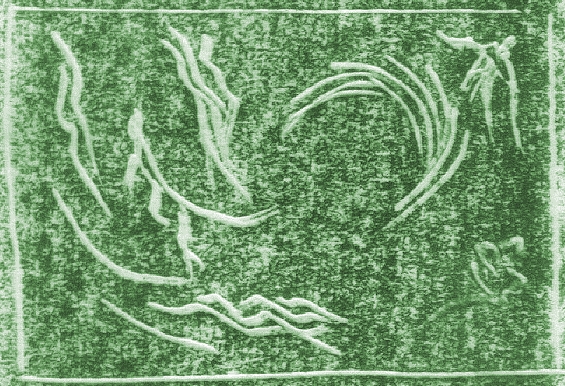 In 1999 I was commissioned by Perth & Kinross Council to create decorative panels for a pair of large Flood Gates to be sited at the Riverside Park of the North Inch. Getting my concept into a presentable form was proving difficult, I knew exactly what I wanted to achieve, sketch after sketch failed to capture what was in my mind, I kept returning to the first little thumbnail I made in my sketchbook. Using a wood nail to incise marks into the blank paper then rubbing over with graphite I was left with a black and white image that perfectly captured my vision, simple flowing marks that created a rhythm across the panel. Little more than one inch square I scanned the image into my computer, colourised and enlarged it and then presented it to the client, to say I was feeling slightly under prepared is an understatement. Luckily the client could see what I was after and the gates were given the go ahead. Everything after that initial ‘share’ becomes technical.

Progressing the design concept I made two plaster sketch maquettes these better illustrated how the panels would be made using a series of ‘negative and positive’ marks.

Thematically I wanted the gates to be symbolically rich, central to my thoughts was the duality of flooding as a negative & positive force, floods destroy but they also bring renewal and regeneration. The River Tay is the largest River, by volume, in the UK, originating from the slopes of Ben Lui in the Highlands, meandering down the Valley of Strathmore, flowing through Perth where it becomes tidal, as William Topaz McGonagall put it :-

The Tay! The Tay!
The Silvery Tay
It goes up to Perth,
And back twice a day!

Conditions which have resulted in its environs having a particularly high bio-diversity value, an area designated as a Site Of Special Scientific Interest (SSSI) for its variety of flora & fauna. Flooding over many millennia has contributed significantly in creating an area of land around the River that supports diverse agriculture and encouraged humans to settle along its banks. The River as essential provider, but also destroyer, better described in Chinese philosophy as yin-yang, the concept of the interconnection between contrary forces in nature.

On a very personal level the River Tay represents a family tragedy, my grandmother committed suicide in the Tay, drowning near Ballathie in 1972. Almost immediately in my thoughts I wanted to include a female figure in her memory.

With the central theme for the panels being the Duality of the River, as a positive and negative force, I wanted to push this further by using floods as a symbol of the end of one cycle and the beginning of a new one reflected the annual cycle of birth, growth and death. Rivers and water are symbolically rich, The Garden of Eden had Four Rivers of Paradise flowing from the well at the foot of the Tree Of Life, bringing life to the garden and nourishing the rest of the world with its life-giving waters. Water is the source of life, a fundamental natural energy it is the essential ‘magic‘ component that creates and shapes the world around us. Having many manifestations, water as a symbol can be illustrated in many forms each with their own meaning and interpretation. Clouds and rain are symbols that have many connotations, life-giving on one hand promoting growth and fertility, it can equally symbolise looming death and destruction; whirlpools are regarded as a primary symbol that represents a life giving force. All these ideas allowed me to explore different shapes and marks upon the surface of the panels.

Bronze had always been my anticipated material, traditional and long lasting it is very flexible able to pick up the subtlest of artists marks. Budgets did not allow for the works to be made lost wax so I had to be creative to be able to use bronze. Exploring my options I approached Archibald Young Founders in Kirkintilloch and worked closely with Director Ian Young on devising a method where the panels would be ‘sandcast’ a traditional method of casting but with technical limitations compared to lost wax process. Size of casting is one limiting criteria, a maximum of 1.5 meter being the largest the foundry could accommodate, the gate panels needed to be made in four parts. Achieving a consistent thickness for the cast panels was another consideration, 6-8mm was the ideal, though smaller areas could be thicker. 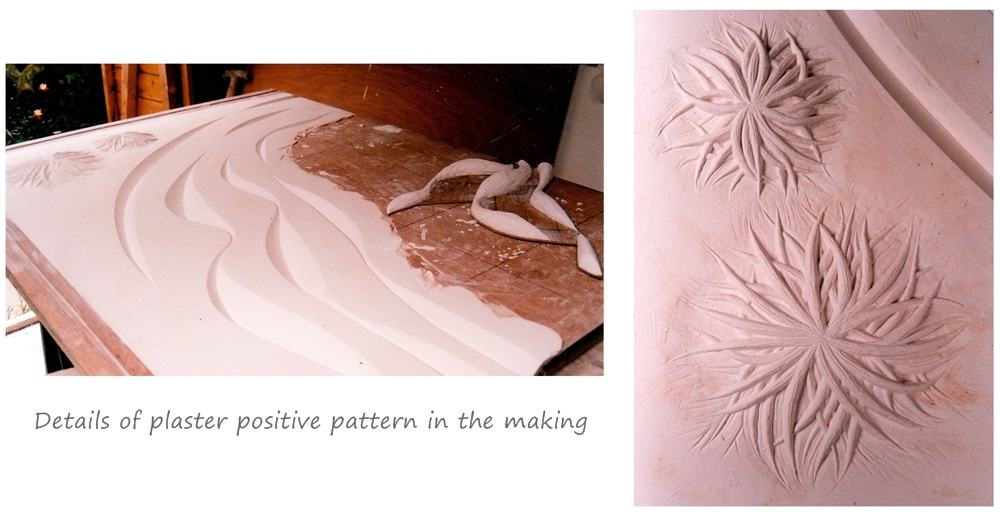 As the gate panels were to be ‘one-off’s’ it was decides that a plaster based ‘positive’ would be made by myself for the foundry. Using 3mm ply sheets as the base board I was able to play about with the ‘plane’ of the panel, I wanted the surface of the panels to have as much depth as possible within the restrictions of the casting process, cutting out sections to make marks/shapes ‘negatively’ and adding onto the board surface to make ‘positive’ shapes. In their final position the gates were to be very accessible to the public I wanted them to work from a distance but also to be rewarding and tactile when you got close to them, alive with making marks, the areas between the shapes full of texture and pattern. It is to the credit of the quality of processes at Archibald Young’s that the surface of the gates retain everything I put into the pattern an amazing achievement given the limitations of sand casting. 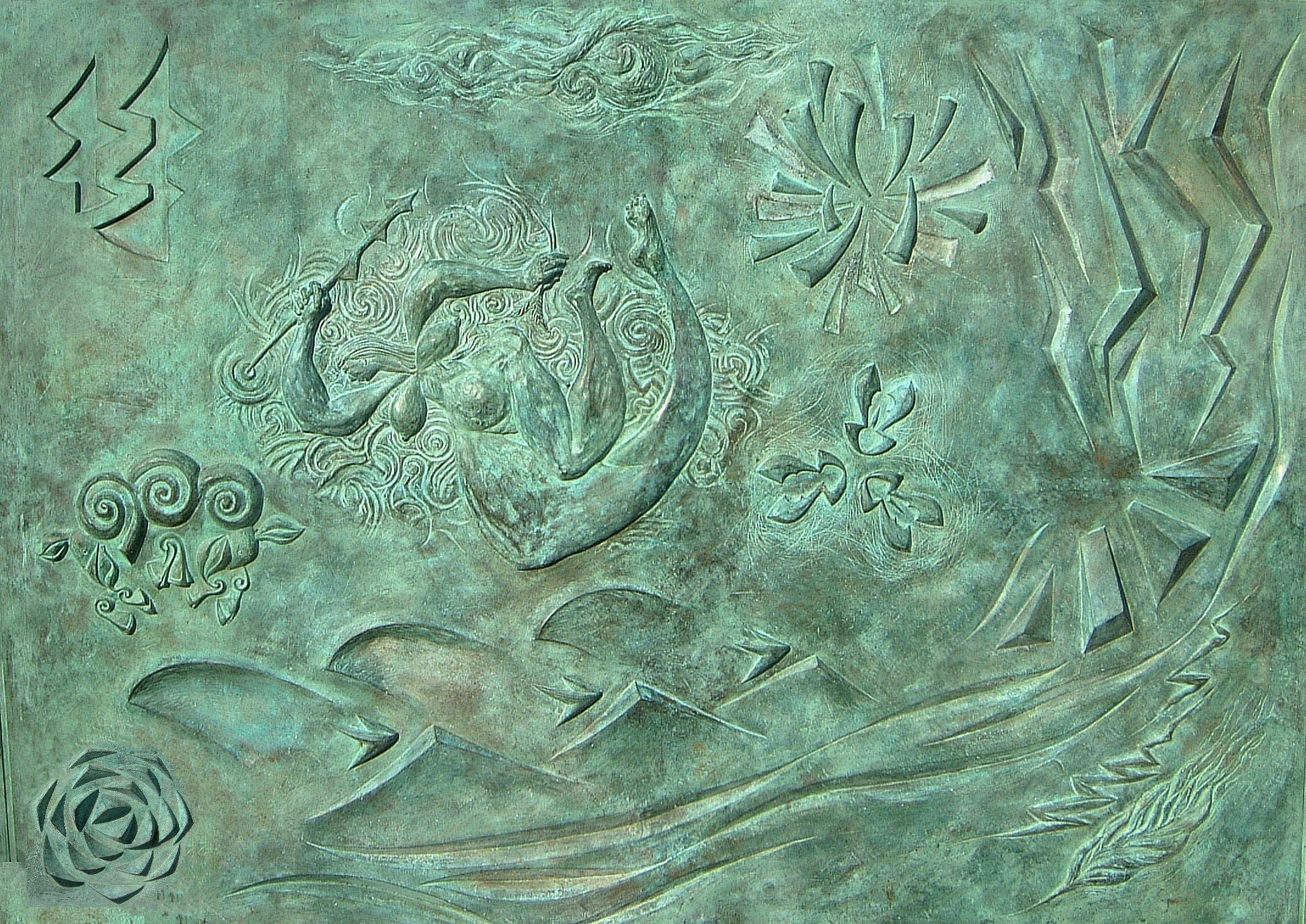 Wanting to include a female figure I researched Scottish mythology and came across the tale of the great Earth Mother/creation figure, The Cailleach. Featuring in Irish & Scottish fokelore the Cailleach has many myths and stories connected with her. Seen as an old woman or hag she was the goddess responsible for creating the land, associated with Winter she used her staff to stir the waters of the Rivers and seas to initiate storms and floods. Returning in Spring she would thrust her staff into the frozen land breaking Winter’s grip allowing conditions to return that allowed agriculture to begin anew. 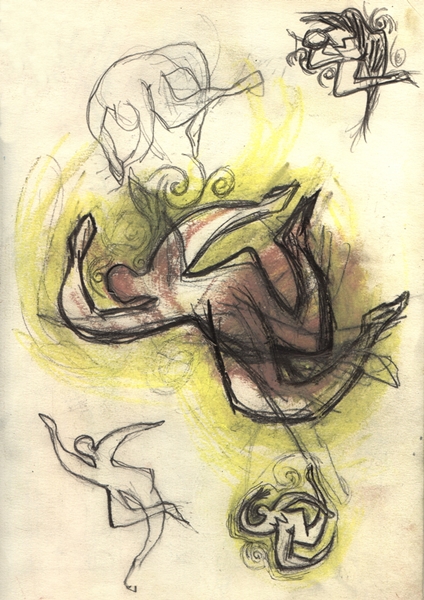 Like a lot of Towns and Cities Perth’s location is intrinsically tied to the River running through it, the River & Town have always had a fundamental relationship. People gathered at this spot due to that relationship, the opportunities it afforded them for manufacture & trade, exploiting the energy the River provided. Crafts & industries requiring free easy access to water thrived in and around Perth, businesses like farming, flax and Linen, forestry, leather production & dying and Whisky. The left hand gate aims to reflect through symbols the industrial and human. 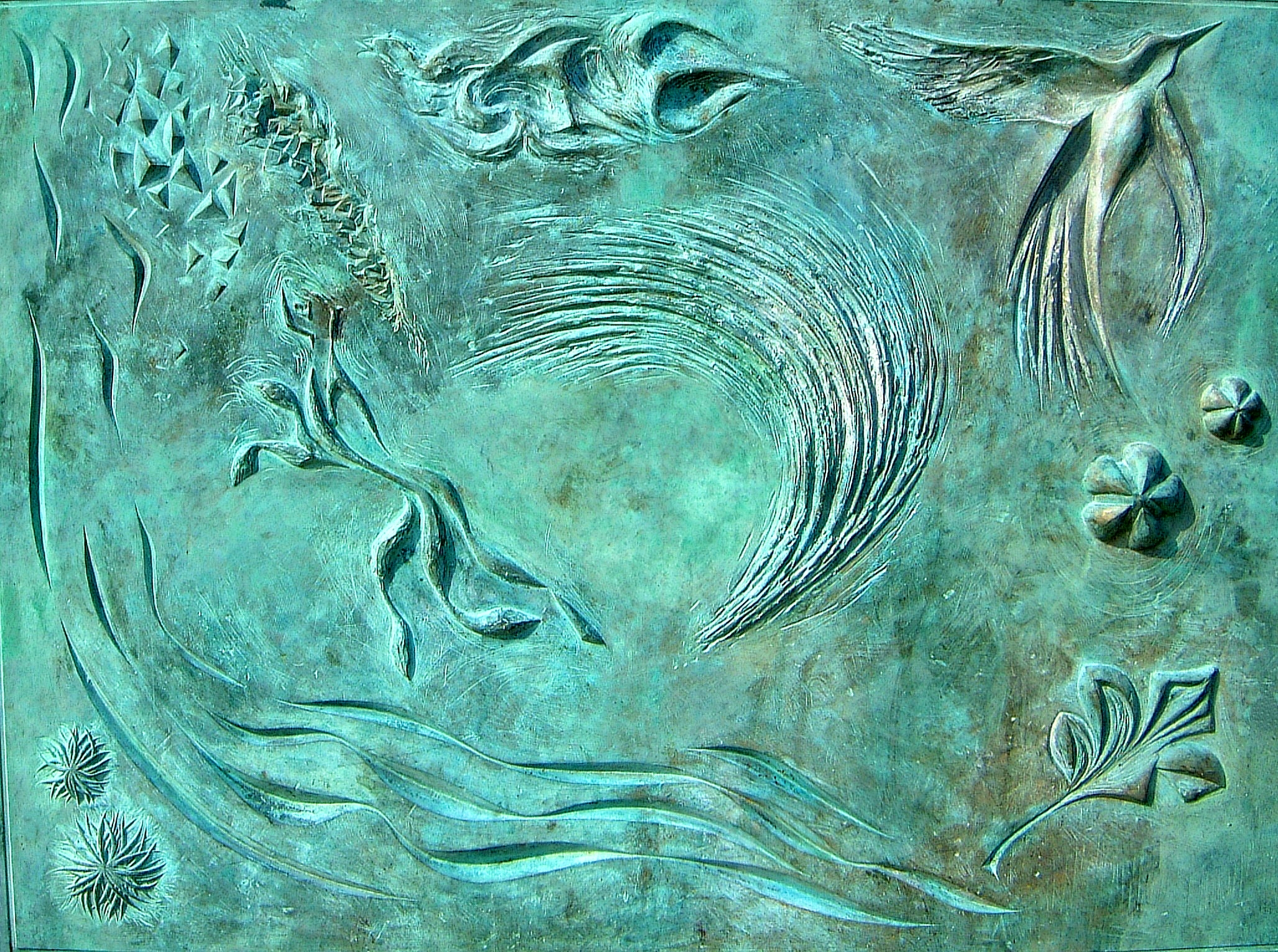 Patrick Geddes spent his formative years in Perth, in one of his books, ‘The World Without The World Within’ subtitled, (Sunday Talks With My Children). He very eloquently discusses the unstoppable life cycle, visible all around us:-

How even in the midst of winter when all is dead in the garden, ‘scrape away a little earth, and you will see there a crocus-bud already piercing it’s way through.’ An incredible powerful affirmation of the act of renewal and the power of life over death.

Subject to daily tidal forces and annual flooding acts, the ebb and flow of the River sets in place a continual cycle of destruction and renewal. Rain causes erosion, washing valuable nutrients, plants and seeds into the River, these in turn are redistributed and deposited along its course, providing ideal natural habitats that allow many species of wildlife to flourish. Migrating birds leave and return with the annual cycle. The right hand gate is intended to reflect the ‘Natural’